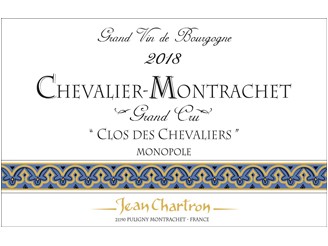 In 2004, Jean-Michel Chartron gave a new impetus to his estate, with the chance to have an extraordinary land heritage (the Clos des Chevaliers is the best part of the Chevalier-Montrachet, itself considered the best grand cru in Puligny after Montrachet). Mineral, nervous, powerful and long, its wines are among the greatest in Puligny. Rated two stars in the Revue du Vin de France guide.

Jean-Michel Chartron was doubly elected "Winegrower of the Year": in the magazine "Bourgogne Aujourd'hui" in March 2018 and in the Hachette guide in September 2018.

To keep or to drink :
Available February 2022

Our different flaconnages and containers